What makes a good dramaturg...?

In one way or another I've worked as a dramaturg or script consultant for over three decades.  I love partnering with writers on developing their stories and getting their scripts to really lift off the page. And throughout the many years I've worked in this capacity there has been one rule that I've always honored and tried to put into practice.

Simply put, I consider my primary responsibility in working with a writer is to make sure I understand what he or she is trying to accomplish with a project in terms of premise or what they hope to leave in the collective heart and mind of the audience--and then help the writer achieve that goal.  In other words, my job is always to aid the writer in arriving at the end result they envision. 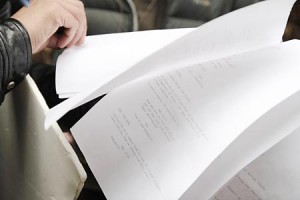 To accomplish this, sometimes it takes a bit of time to get the writer to articulate what is really wanted as an end result.  Often it remains somewhat vague at first, but I tell the author that my job is to help them arrive at that final story destination in a way that underscores his or her reasons for writing the script in the first place.  So I ask:  What is the tone you're after...?  How do want the audience to feel and think about the story they've just witnessed at the final fade to black...?  What would you want an audience member to say if asked to briefly describe your story to someone who hasn't yet experienced it...?

Then, armed with these ideas, we can go to work together because at least a tentative end goal has been clarified.  Of course, it can change as discoveries are made, but it's my job as dramaturg to always be aware of that final destination being sought, even if at times it seems a bit elusive and the target shifts somewhat one way or another.

Too often I've heard horror stories in which the dramaturg or director or producer commandeer a new project and attempt to turn it into the story they would like to tell.  This is not what a dramaturg (or anyone hiding behind some other title who is doing the same thing) should ever be doing.  The dramaturg's primary duty is very straight forward:  To listen closely to the writer when describing what he/she is after and make every effort to help guide the story to that end.

Posted by Buzz McLaughlin at 8:44 AM