As you're working on developing a new story idea it's fun to get totally consumed in your research and pre-draft character backstory work.  This is as it should be of course.  You find yourself accumulating a mountain of information that you think somehow, one way or another, could be directly or indirectly related to the story you want to end up telling in your finished script.  For many writers this is one of the most enjoyable phases of creating a new work.  And the amount of material gathered can often be extensive.

However, if you work this way (and I hope you do if your endgame is to write a script that pops off the page with characters that have a genuine life of their own operating in a world that has depth and rings authentic) then here's a little tip that will help you process all that pre-draft work and have it pay generous dividends.

Simply put, from the very early stages of developing your idea, begin setting out your plot structure for your story--as simple and basic as it might be at first--and periodically go back to it as you explore your characters backstories, their voices, and research the world your story is set in. 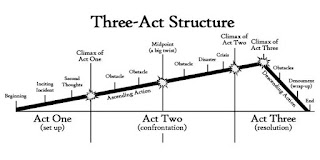 I begin by setting out three index cards on a work table in my office (a table cleared of all other stuff) and I write Act 1 on one card, Act 2 on the second, and Act 3 on the third and set the three cards in a row.  Then under each of these cards I add other cards with a single thought or plot point written on each and place them under one of my three acts. This at first is very very tentative and basic--i.e. a possible inciting incident in Act 1, a possible mid-point in Act 2, or the big climactic or obligatory scene in Act 3--any plot points in any act that seem like they might at this early stage be a part of my developing story.  One thought or plot point per card.

This is sometimes seemingly arbitrary and nothing more than a guessing game.  But as you work at this over time, the number of cards will grow and your grasp of your overall structural shape will strengthen.  You might have as many as 50, 60, 70 cards in total before you're done, maybe more maybe less.  The number doesn't really matter.  What is important is that you can rearrange your cards, eliminate those that don't fit, and keep adding large and small plot points, transitional scenes, etc.  The beauty of working this way is the flexibility you have as your story structure begins taking shape on that table in front of you and you're steadily gaining a stronger grasp of the structural whole.

The point here is that I suggest you start this card game very early on in your development process so that as you do your research and your character exploration work you are already consistently walking through a developing story structure--a structure that informs your pre-draft work and at the same time is itself informed by your growing discoveries about your characters and their world. They feed off each other.  And the hope is that working this way, the finished plot outline you end up with has grown organically out of your pre-draft exploratory work--which is, without question, the result you want to achieve before plunging into draft.

I'm the Program Director of the low-residency MFA in Writing for Stage and Screen being offered by the New Hampshire Institute of Art.  Our last residency just ended, running from January 6-15, and we are currently accepting applications for starting the program with our June 2017 residency running from June 22-July 2.  I'm also a playwright and screenwriter, producing partner in my production company Either/Or Films (The Sensation of Sight and Only Daughter) a professional script consultant, and the author of The Playwright's Process.
Posted by Buzz McLaughlin at 8:22 AM