The script for Brooklyn: a second act meltdown

My wife and I finally caught up with the film Brooklyn last weekend.  It's been in our queue and we were looking forward to screening it.  And many aspects didn't disappoint.  The performances are all first rate, the cinematography is beautiful, and the overall look and period feel reads authentic.  And, most importantly, an hour into the film we were totally swept away with the story.

The script's Act 1 is masterful in inviting us into young immigrant Eilis Lacey's journey to America--her bright spirit as well as her struggles, her fears, and her growing isolation resulting from her immense decision to cross the sea to a new life.  We fall in love with her and the life she finds herself in.  And then she meets this special and humble young man (Tony) at the end of Act 1 and suddenly everything shifts and we're further carried away into her Act 2 romance.  The film is succeeding to totally immerse us in Eilis's world, taking us inside the story, increasingly carrying us along with the tale's forward momentum, up and through Eilis and Tony's elopement. Then at the midpoint of Act 2 Eilis gets the news that her only sibling, her sister, has suddenly died back in Ireland and Eilis has no choice but to return home to comfort her widowed mother.  A key plot point that again throws us in a new direction--setting up strong jeopardy to her new found relationship.  All is well with the story up until now.  I even recall saying to my wife at this point what a beautifully constructed screenplay this is. 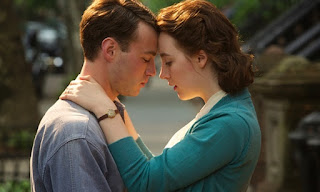 And then, unfortunately, everything starts to fall apart.  Once back in Ireland, our heroine meets and slowly begins to fall for another young man and suddenly we start feeling as if a narrative switch has been turned off.  The Tony love story is literally dropped from the tale and we are left increasingly bewildered, watching our Eilis step ever deeper into this new life with scarcely a thought of who and what she left behind in America.  Absent are the moments of struggle pulling her heart in two opposite directions.  Absent is any visible concern over the fact that she is married to another man.   Or an explanation as to why she won't even open Tony's many letters to her. Or why she let her secret go on so long.  Or show moments of agonizing struggle as she's pulled ever deeper into this false life. We began to wonder if she would have ever told the truth of her marriage to anyone if she hadn't been eventually caught in her lie.  And as a result we felt like the rug was pulled out from under us.

The film is actually an excellent example of how a script can go wrong in the second half of Act 2, often the trickiest part of a screenplay to get right. Basically, the problem stems from the story not staying true to its central character who has been so expertly and successfully established in Act 1 and the first half of Act 2.  As a result, in Act 3 when Eilis finally makes the decision to return to America and her Tony, the story is so derailed that it rings false and isn't really earned.  As Anthony Lane asks in his review of the film in the The New Yorker, "Why does that choice [between the two men] not feel more like a wrench?"  The reason is that we no longer know who this central character is or why she is behaving the way she does. 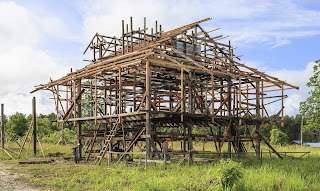 I'm the Program Director of the low-residency MFA in Writing for Stage and Screen being offered by the New Hampshire Institute of Art.  Our last residency ran January 3-11, 2016 and we are now considering applications for starting the program with our July 2016 residency that runs July 21-31.  I'm also a playwright and screenwriter, producing partner in my production company Either/Or Films (The Sensation of Sight and Only Daughter), a professional script consultant, and the author of The Playwrights Process.
Posted by Buzz McLaughlin at 2:41 PM No comments: