My encounter with Edward Albee...

Last month the news swept through the theatre and entertainment world that Edward Albee passed away.  Unarguably one of America's greatest playwrights, Albee left a mark on American dramatic literature that has only been equaled by the likes of O'Neill, Miller, and Williams.  He was a towering figure and his work will live on after him as his plays continually come alive on the stages of the world. 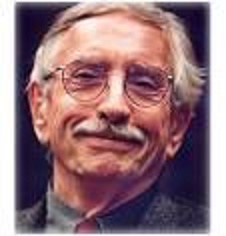 During his professional life Albee also had a reputation of being a prickly and oftentimes difficult man whose arrogance could turn people off and that could make him a handful to work with.  I thought my own encounter with him several years ago might be interesting to relate in this regard.

In the 1990s I conducted a popular five-year series of process-oriented interviews with 16 leading American playwrights at the old Dramatists Guild headquarters in New York City, high atop the Sardi's building on 44th Street.  Guild members made up the large audiences for these events and I would sit on the stage with each playwright for an hour and a half and ask questions on his or her own writing process, starting from when they first got a germ of an idea and leading each of them through every step of their own journey in creating a finished draft.  This interview series is highlighted in my book The Playwright's Process, including hundreds of choice quotes.

Each interview was a harrowing  and at the same time exhilarating experience for me.  I'd ask a specific question and then listen to the answer while at the same time formulating the next question to ask.  And sometimes there would be serious resistance to exposing or even talking out loud about their own writing process, especially in front of hundreds of fellow playwrights.  It would often take some time into the interview before my interviewee could relax and realize they were in a safe place and that the audience (including me!) was seriously interested in the details of how they work.

In this regard, without question the most difficult experience I had was with Edward Albee.  Our interview started (as I started every one of my interviews) by asking the question, "When you first come up with a germ of an idea for a possible play, what initial tests do you put that idea through to determine whether or not it's something you might want to pursue further?"

When I asked Albee that question, he turned to me and, with a mock dumbfounded look on his face, asked, "What's an idea?"  The audience howled with laughter.  I tried as hard as I could to explain in other words what I was getting at, but at every turn Albee would slice my question to pieces to more laughter.  But I was determined, in spite of his efforts to make fun of my effort to get him to discuss his process.  Finally, on my fourth or fifth attempt to launch the interview, Albee threw out another zinger and with the audience practically rolling in the aisles, he reached over, put a hand on my shoulder, leaned over close and said "I'm sorry."

From that moment on, he opened up and gave all of us a brilliant evening of insights, all focused on process.  He listened to each of my questions and answered them fully, adding dozens of examples from his own famous plays.  It was the best interview of the entire series.  And afterwards he thanked me and said seriously it was the best he'd been involved with as well.

So my encounter with Edward Albee revealed the generous and giving man he was under the sometimes hard and prickly surface. Many colleagues fortunate enough to know him say they've had the same experience.  This was a genius of the American theatre who also gave back in multiple ways to his art form in addition to leaving us all with his brilliant plays.  God speed, Edward Albee.

I'm the Program Director of the low-residency MFA in Writing for Stage and Screen being offered by the New Hampshire Institute of Art.  Our last residency ran July 21-31, 2016 and we are now considering applications for starting the program with our January 2017 residency that runs January 6-15.  I'm also a playwright and screenwriter, producing partner in my production company Either/Or Films (The Sensation of Sight and Only Daughter) a professional script consultant, and the author of The Playwright's Process.
Posted by Buzz McLaughlin at 12:51 PM