I'm continually struck by the degree to which I find myself telling writers to take their efforts with creating a new script one step at a time.  There are days we all have when everything seems totally out of reach and all you can hear is that nasty whispering voice saying "who are you trying to kid."  And it's on those days that you have to step back, take a deep breath, and realize that it's baby step after baby step that allows a script to come into being.  It's all a process, with one element building on the next. 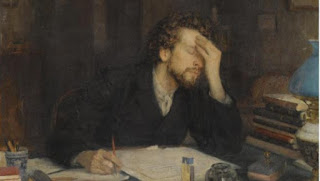 As I've often said in this blog, writing a play or screenplay is a big undertaking, a complicated and intricate puzzle to solve.  And like puzzle pieces poured out of the box and onto a table, you start by finding a method, an approach to organizing that jumbled pile of tiny cut pieces into a plan of attack that will eventually produce a beautiful finished picture.


So often writers seem to think that somehow that jumble of thoughts and bits of ideas that attract you to a project to begin with will magically fall into place as pages are turned out.  Unfortunately it doesn't really work that way.  Instead, there needs to be a careful step by step process that's applied to the development of that idea--a process that allows you to first explore your characters in depth, discover the backstory that your tale rises out of, and build an initial structural road map that allows you to enter the writing of your draft with at least one route to follow that will lead you to your ultimate destination.

Sometimes, depending on the project, this process involves extensive research that carries you deeply into the world of your story.  So do the research.  It's all part of the "writing" of your script.  And think of this pre-draft work as an adventure, with one thing leading to another and then another.  It's like peeling an onion, one layer at a time.  And with a little patience and deep breathing, eventually you discover the ingredients you need to tell your tale in a sensitive and intriguing way.

Good scripts get written one step at a time.  In other words, trust the process.

Posted by Buzz McLaughlin at 1:18 PM