A classic problem in scriptwriting...

I've been working with several writers in the past few weeks as they work on plot invention and laying in the necessary information for a story to make sense and to move forward at a good clip.
And in the process the old classic issue of how to deal with exposition always rears its head and one way or another has to be dealt with.

What I've been finding myself explaining multiple times is that often the one sure-fire way--maybe the only sure-fire way--to plant critical information in your developing story is to find a way to weave it into an argument between your characters.  The simple truth is that an audience will be interested first and foremost in the dynamics of the disagreement or conflict they're witnessing--how the characters are reacting to each other emotionally and how each is responding personally.  And in the midst of the argument and heated exchange, the characters will be compelled to throw out the information you need the audience to hear for the story to make sense and move forward. 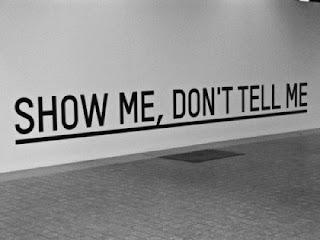 The interesting aspect of this is that your audience won't even realize that they've just absorbed key facts that have to be a part of your unfolding story.  They hear the exposition--the actual words describing the info that has to somehow get into your script--but it's delivered to them under the table so to speak.  What your audience is caught up by is the argument and the accompanying emotional colors that couch it.

I'm the Program Director of the low-residency MFA in Writing for Stage and Screen being offered by the New Hampshire Institute of Art.  Our last residency ran July 21-31, 2016 and we are now considering applications for starting the program with our January 2017 residency that runs January 6-15.  I'm also a playwright and screenwriter, producing partner in my production company Either/Or Films (The Sensation of Sight and Only Daughter) a professional script consultant, and the author of The Playwright's Process.
Posted by Buzz McLaughlin at 5:25 PM