What to do when your first draft sucks...

For starters, first take a deep breath.  Then give yourself a pat on the back for having pushed through the wilderness to the finish line for the first time regardless of how bad you think it is.  Pushing through the entire story in draft form is obviously a major step.  Finally, put that first draft away and forget all about it for at least two or three days or a week or longer and let it cool.  Getting some distance is critical.  Remember, what you at first think is terrible is usually much better once you come back to it--if you've put it out of your mind for a while.

In that cooling off period, remind yourself that successful and well known scripts you have read and studied are projects that have gone through several if not many many drafts.  Scripts that have been tested with actors and that have incorporated lots of good feedback in subsequent drafts by people who understand what makes a script work and lift off the page.  That these plays and screenplays have gone through the ringer so to speak in order to eventually come out as polished finished works. 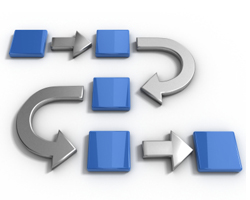 So many of the writers I work with need to be reminded that the name of the game is process.  That once you come back to your initial draft your job is to take it one step at a time regarding rewrites. You first need to determine where you sense the biggest road blocks--the scenes that stop the forward movement of your story.  Then determine which of these is the biggest problem and fix it by trying a different approach.  Just that one problem.  Then examine the ripple effect that one fix has on the rest of your script and make necessary adjustments along the way so your fix fits in and makes sense throughout your tale as it unfolds.  Then tackle the next biggest issue, and so on and on...

The key is to never panic and to always realize that you peel the onion one layer at a time.  And when you make one fix it will suggest another fix and another.  Some big, some small, but all making a contribution to allowing your script to eventually get better and begin to lift off.

I will always remember what Athol Fugard, the highly successful South African playwright, told me in an interview I did with him regarding his first draft woes:

There is always a mortifying moment when, having pushed through that first draft without going back and checking anything--just working, just driving, just trying to create that arc on paper using the scraps that you've accumulated--there is always that moment when you say, "All right, that's finished, now I've got to read this."  And then you read it, and it's an awful experience....I have never experienced anything but the most appalling, sinking feeling on reading the first drat of a play.  Every time!

The difference with this writer and all successful writers?  He knew it was all process and that he'd eventually produce another wonderful finished work.

I'm the Program Director of the low-residency MFA in Writing for Stage and Screen being offered by the New Hampshire Institute of Art.  Our last residency ran July 21-31, 2016 and we are now considering applications for starting the program with our January 2017 residency that runs January 6-15.  I'm also a playwright and screenwriter, producing partner in my production company Either/Or Films (The Sensation of Sight and Only Daughter) a professional script consultant, and the author of The Playwright's Process.
Posted by Buzz McLaughlin at 3:07 PM