The tyranny of the written...

Often, the biggest rewriting hurdle for writers is freeing themselves from words already written-- prying loose material that's been, for one reason or another, set in concrete in your mind but in truth is weighing your script down and keeping it from lifting off as it needs to.  And, of course, the remedy is to develop an attitude that doesn't allow your mix of words to harden in place prematurely. 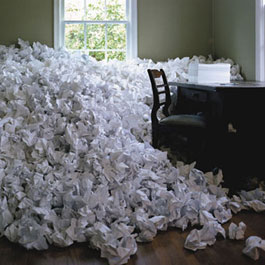 The late Horton Foote, one of our revered playwrights and screenwriters, once told me the following:

You have to divorce yourself emotionally....There's a point where I just calm down and cool it and become as objective as I can.  I find those moments that are really essential, and I find those that are nonessential, and sometimes it kills me; I've cut some of the best writing that I've ever done.

The basic rule here is that if the script as a whole is to be served, you sometimes have to be willing and able to let things go.

Probably the most striking example of this is Edward Albee's experience with his Pulitzer Prize-winning play Seascape.  He told me that he discovered at the first rehearsal that what he thought was a play in three acts was really a play in two acts, so he cut out the second act entirely, going from two intermissions to one.  One day the play had three acts and the next morning it had two.  And he told this story with no regrets whatsoever.  The work as a whole was served, and that's what counted. Extreme, yes.  Necessary?  Absolutely.  He discovered the play was structurally sound without the material between the first and third act.

So be tough on yourself if you can.  More than likely you'll be serving your script by heeding the mantra "less is more."

Posted by Buzz McLaughlin at 5:10 PM