Networking in our MFA Writing for Stage and Screen program, Part 1...

I'm thrilled to announce the national premiere of a new play written by one of our recent MFA graduates and produced by a soon-to-be graduate of the program.  The play is called Cleave, the work of  Los Angeles writer Vicki Peterson who graduated with her MFA degree last June.  Owen Robertson, who will be graduating from our program this coming July, is producing the play in Tampa, Florida in a co-production of Lab Theater Project and Stageworks Theatre Company.  The production will run from this Thursday, March 17 through Sunday, April 3rd. 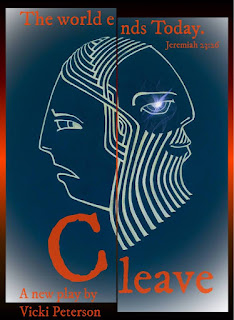 Cleave tells the moving tale of a self-proclaimed prophet's wife, who gives birth to her child on the very day her husband has prophesied the world will end.  As they prepare for the end, a teenager stumbles upon their homestead, bringing with her conflict, doubt and perhaps hope.  The play explores the nature of spiritual abuse and the moral and spiritual cost of making idols out of men.

Playwright Vicki Peterson wrote the play along with several other scripts while in our MFA program. Her work has received considerable recognition, including her screenplay Zoe and the Zebra, which won Best Screenplay at the Irvine International Film Festival and the California Independent Film Festival.  She is also co-author of Notes to Screenwriters, a recently published book on screenwriting, and for many years has been partner in the script consulting firm Catharsis, based in Hollywood.

Owen Robertson is an established professional in the Tampa-based theatre scene and founder of the Lab Theater Project.  A well known local actor, Owen is also a teacher and emerging playwright himself.  Owen has flown Vicki to Tampa for the final week of rehearsals and says "Vicki is helping and watching the show grow--my dream of a safe place for playwrights to see their shows come to life and to feel they have a voice in that process."

Needless to say, I'm proud of these two members of our MFA "family."  It bodes well for our program's future as more and more projects we've had a hand in generating are being given professional recognition and life throughout the country.

I'm the Program Director of the low-residency MFA in Writing for Stage and Screen being offered by the New Hampshire Institute of Art.  Our last residency ran January 3-11, 2016 and we are now considering applications for starting the program with our July 2016 residency that runs July 21-31.  I'm also a playwright and screenwriter, producing partner in my production company Either/Or Films (The Sensation of Sight and Only Daughter), a professional script consultant, and the author of The Playwrights Process.
Posted by Buzz McLaughlin at 11:33 AM