DiCaprio: It all starts with the script

For all of you writers who are working your way through an initial draft, keep in mind that any successful project always starts with the script.  And taking the time and effort to make that play or screenplay or teleplay totally lift off the page is well worth the struggle before releasing it to the world.

Here's what Leonardo DiCaprio had to say on the subject in an interview with Charlie Rose a couple of years ago:

"Everything at the end of the day when you're making a movie starts with the material and how well written the script is...  I've never seen a silk purse made from a sow's ear...  I've never seen it happen wherein a 'crap' script with 'crap' characters, a director somehow found a way to make a masterpiece out of it." 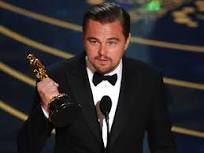 "And that's the constant struggle we all sort of have as actors...it's finding those gems and that's why people grab onto them like vultures... When you find a great piece of material or a great script it's like (he motions with his hands in a vulture grip)...You should see what happens...it's like a piranha feeding fest!"

So take your time with that draft and your subsequent drafts.  Fight the urge to release that script before it's as good as it can possible be.  Set your sights high.  And never compromise or settle for second best.  Work at it until you know it's right and is, indeed, one of those gems that can trigger its own feeding fest.

Posted by Buzz McLaughlin at 10:02 AM