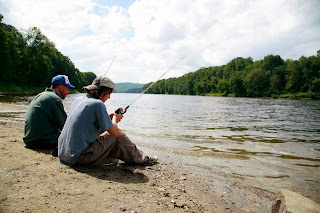 
This approach to developing a screenplay is certainly not the norm.  And it was only possible because the project was made for so little money by people who donated their time and creative energy simply because they wanted to make it happen.  With no money to speak of, the film was made by a group of dedicated artists who wanted to work together and produce a movie they could be proud of.  I think they definitely accomplished that.  And it was the same with post production because another group of artists stepped in to finish the job in the same spirit.

Regarding the screenwriting piece of this, what I think is most telling is that the micro budget approach to filmmaking opens the door to the possibility of workshopping the story as this group did with Only Daughter.  The actors involved with the film and who were a part of this development process were local, non-union, and had never worked on a feature film before.  But the time spend working together on the story greatly informed their work during the filming (not to mention Aaron's work as writer/director) and their performances for the most part are pretty much off the charts.  I'm happy to say that the juries at festivals are agreeing with that assessment.

So this poor man's experience in filmmaking opens up another approach and attitude regarding the role of the screenwriter in the story development process.  It's not that the screenwriter is suddenly being absorbed into the ensemble, but rather by working with the ensemble as a fellow collaborator, he or she stands a better than even chance of seeing their script ultimately come fully to life and actually get made into a film that can be experienced by audiences.

In addition to being an independent film producer and script consultant, I'm the Program Director for a low-residency MFA degree in Writing for Stage and Screen offered by the New Hampshire Institute of Art (currently accepting applications for our January 2014 residency).
Posted by Buzz McLaughlin at 6:42 PM