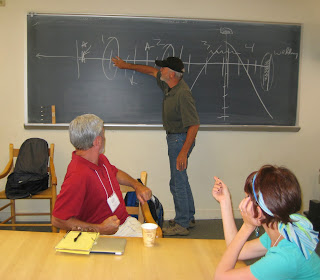 We went from story idea to story idea and kept applying the same basic questions to each one.  It wasn't long before it became clear what structural components need to be in place for any story to really work. All the stories were miles apart in terms of setting, place in time, theme, and general situations, but the structural framework holding each together was the same.

I kept thinking about the preparation process involved in laying the foundation for a building up here in New England.  It has to be planned out and designed and the concrete needs to be poured deep enough to get below the frost line.  If these principles are ignored the building constructed on top of it will not stand the test of time (or even the first winter deep freeze).

What also came to mind was the analogy of lining up a hundred different people--all different nationalities, races, sizes, etc., all with different names and personalities, backgrounds, hopes and dreams, and so forth.  Each individual is unique and interesting for who they are.  But if you could reduce all 100 of them to just their skeletons, it would be difficult to tell much, if anything, that differentiated them other than height, age, and possibly sex if you were an expert.  The structural components are all basically the same.

After this we spent considerable time on character and backstory work.  However, to my mind, the workshop was already a big success in that all the participating writers had walked through the most critical early phase in developing a story idea.  And they each went home with much more than an idea in hand--they had a work in progress with solid structural underpinnings.

In addition to being an independent film producer and script consultant, I'm the Program Director for a low-residency MFA degree in Writing for Stage and Screen offered by the New Hampshire Institute of Art.
Posted by Buzz McLaughlin at 1:58 PM