The two pillars of a good story

The true test of a viable story--one that ultimately will lift off the page and really deliver the goods--is the strength of your plot points at the end of your structural Act I and Act II.  These are the I-beams of any well constructed story, whether it be a play, screenplay, teleplay, or any narrative fiction.  They each dictate what has to have already happened and what will happen as the story unfolds. 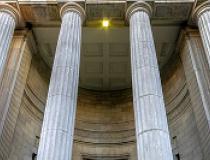 Of course there are a lot of other plot elements that also have to be in place like the Act I inciting incident and the the Act II mid-point, etc. etc.  But the initial development of any good story has to start with these two plot points.  Everything else can then be built on top of these essential structural pillars.

I'm the Program Director of the low-residency MFA in Writing for Stage and Screen being offered by the New Hampshire Institute of Art.  Our last residency ran from June 22 to July 1 and we're current considering applications for starting the program next January at our residency scheduled for January 5-14, 2018.  If you're interested in finding out more about our program, email me at buzzmclaughlin@gmail.com and we can start a dialogue.

I'm also a playwright and screenwriter, producing partner in my production company Either/Or Films (The Sensation of Sight and Only Daughter) a professional script consultant, and the author of The Playwright's Process.  You can follow me on Twitter @eitherorfilms or @mfastagescreen.  I’m also on Facebook at buzzmclaughlinscriptconsulting.
Posted by Buzz McLaughlin at 1:45 PM