The ability to discard...

One of the things that's always impressed me when talking about the rewriting process with successful writers is that they all seem to have one trait in common:  They're ruthless when it comes to cutting material that isn't exactly right. 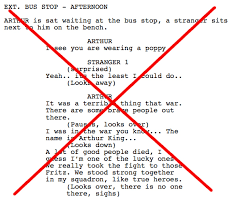 Most have said in one way or another that it's when they finally were able to discipline themselves and develop the ability to cut material in their working draft that their writing started to take off. They've found it liberating and exciting.  And have embraced the absolute necessity of not allowing their scripts under any circumstances to be saddled with material that isn't working fully.

The little writer's cliche "If in doubt, cut it out" comes into play here.  You may not fully understand your doubt about a line or exchange, but if you feel at all uneasy about it, trust that probably there's something wrong with it.  And usually the problem turns out to be that the material in question isn't really needed and in fact slows down the forward movement of the script.  It's essential that you train yourself to become sensitive to this built-in sensor and not to ignore its warning buzzer when it sounds, quiet as it may be at times.

This ability to discard has been a major factor in the success of all great writers.  It's one of those elements of the craft that they've mastered, and its application has played a key role in lifting their work into a league of its own.

I'm the Program Director of the low-residency MFA in Writing for Stage and Screen being offered by the New Hampshire Institute of Art.  Our last residency ran from January 6-15, and we are still considering applications for starting the program with our June 2017 residency running from June 22-July 1.

I'm also a playwright and screenwriter, producing partner in my production company Either/Or Films (The Sensation of Sight and Only Daughter) a professional script consultant, and the author of The Playwright's Process.  You can follow me on Twitter @eitherorfilms or @mfastagescreen.  I’m also on Facebook at buzzmclaughlinscriptconsulting.
Posted by Buzz McLaughlin at 10:58 AM