At the first draft starting gate: the ripple effect

I've always appreciated the phrase "ripple effect" because it nicely describes what occurs when you plunge into the writing of your first draft.  It implies that discoveries continue to be made as the starting gate is finally lifted and you begin the actual writing regardless of how much pre-draft exploratory work you've done.  And this is as it should be. 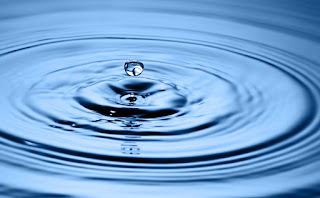 Because of this, however, in almost all cases, it's wiser to write that first draft in order from beginning to end so that the new stuff you are sure to uncover--subtle quirks of character, a surprise aspect of a relationship between characters, a slightly different voice that emerges in those early pages than you expected--are incorporated in the ongoing narrative as it unfolds.  These discoveries cause ripples that extend outward and throughout the telling of your story, some large, some small, but all critical in terms of how your actual draft develops from start to finish.

I'm not saying that early exploratory writing--actual dialogue scenes with your characters--shouldn't be attempted and played with prior to starting your draft.  But the purpose they serve is to hear and capture the voices of your people and aspects of their personalities, attitudes, relationships, etc.  So my advice is to have these scenes be from episodes outside of the script itself--backstory events that will give your characters a chance to express themselves and reveal to you more about their quirks and special personality traits.

One of my favorite examples about the experience of writing a scene prematurely and out of order was offered by Edward Albee in my interview with him at the Dramatists Guild many years ago, as he explained what happened as he was writing Who's Afraid of Virginia Woolf?:

I was writing the first act...and got an idea for a scene for the third act...which I wrote down.  It was about seven pages, and I thought it was pretty good.  Then I went back and finished the first act, wrote the second act, and got into the third act and remembered I'd written these seven pages for the third act.  I found them and read them, and I still thought they were pretty good.  And I tried to put them in the play, but I discovered that the characters wouldn't say them.  They no longer fit into the play because I'd written them too soon... They were perfectly valid.  It was good dialogue... but I clearly didn't want the characters to say them anymore because I'd written them too damn soon.

Lucky for all of us, Albee had the discipline and instincts to reject these seven pages--something that's often not easy to do.  The point being that it's almost always safer and more productive to start your first draft at the beginning and push your way through in order, one scene at a time.  And let the ripples come as they may.