Last weekend I attended a new film festival in the heart of New England called the Monadnock International Film Festival named after the famous mountain that looms over the region.   Put together by a group of dedicated folks who simply decided they wanted to celebrate the artform, this three-day inaugural event was nothing less than a blowout success.
Held in Keene, New Hampshire, it became quickly apparent that this seemingly modest attempt at pulling off a new film festival was turning into something much more.  Public support was amazing.  Every screening was standing room only.  So were the panel discussions.  As were all the downtown after parties.  Ticket and pass-holder lines for closing night went around the corner from the main venue and stretched on for over a hundred yards back into a parking lot. I was amazed (as were many others) at the overflow crowds for every item on the program.  Throughout the festival, there was a special and highly charged energy that was clearly felt by everyone attending.
The culminating screening on Saturday night was the pre-television release of Ken Burn’s powerful documentary The Central Park Five to be broadcast nation-wide on PBS next week on Tuesday, April 16th.   Burns, who with his daughter and son-in-law, wrote and directed the film, was there in person to receive a special award.  And along with two of the men whose story was being told in the film (Raymond Santana and Yusef Salaam), Burns took part in a stimulating Q and A with a packed house of over 900 people who to a person stayed for over an hour after the final credits rolled to discuss the film. 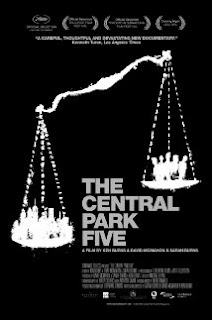 As I sat in the last row of the old restored Colonial Theatre in downtown Keene that night, I was struck yet again at the power of film when it is screened for a flesh and blood live audience.  And how this was proven again and again with every screening I attended during the festival.  I was reminded of the continued hunger that people obviously have to gather together as a special community for a brief time to experience a work of art.  Live theatre offers this special coming together, but so does cinema.

With all the talk and speculation about how the digital age is rapidly eliminating the desire or need for people to see films in theatres, this festival was, in a sense, an answer back.  Or, maybe more accurately, a shout back, saying that the movie theatre experience still has life in it and that cinema is only fully realized when that community of audience is there experiencing as one the unfolding of a film’s story.

So I send out my own shout to the Monadnock International Film Festival with a loud BRAVO!  And for reminding me and everyone else who was lucky enough to be a part of this event that there is still real magic to be found in going out to the movies.

Posted by Buzz McLaughlin at 11:35 AM