How to handle the "bad day"

I know I've posted about this before, but how to deal with a bad writing day is something worth revisiting.  All of us experience these painful first draft sessions when everything comes to a grinding halt and the whole project you've been slaving over suddenly appears ridiculous.  And the negative voice grows to a fever pitch in volume asking "who are you trying to kid?" 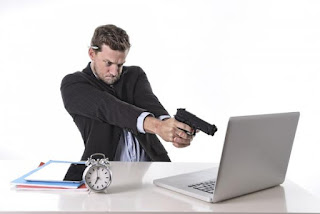 Writers who have developed long successful careers have figured out how to handle this, depressing as it may be when it happens.  They've learned that they don't have a choice but to embrace these roadblocks as just part of the process and they've trained themselves to push through the inevitable moments of uncertainty, doubt, and a sense of being totally lost.

For example, Tony Award-winning playwright John Guare once told me when this happens, his solution is to "let it sit...It's not writer's block.  It's just that inside, down deep, you're trying to figure it out.  And it's just saying 'Leave me alone for a bit.  Just go away and do something else, because I'm trying to figure this out.  Come back in a couple of days.'  And I trust that process."

Or as multiple Tony Award -winner Terrence McNally tells us:  You should write with confidence and courage and boldness and be grown up enough when you have a bad day to just go out and get some ice cream and say, in the immortal words of Scarlett O'Hara, 'I'll think about it tomorrow.'"

Academy Award-winning screenwriter and playwright John Patrick Shanley puts it this way:  "You look at it and say, 'I don't know what to do,' and then you tell yourself, 'Well, you haven't known what to do before, and someday you will know what to do.  Put it away and go on with whatever else you're doing.'"

First drafts are tough largely because they don't have that sense of polish and professionalism of successful scripts you're familiar with.  And you have to just accept that your initial pages you're turning out may very well not measure up.  Just keep in mind that every one of these successful scripts was brought into existence in the same way yours is.  And the finished work might be the fifth, tenth, or twentieth  reworking of the very first pass through the story.

And especially with that first draft, bad days come with the territory.

Posted by Buzz McLaughlin at 11:04 AM